OEE - Should you being using it? 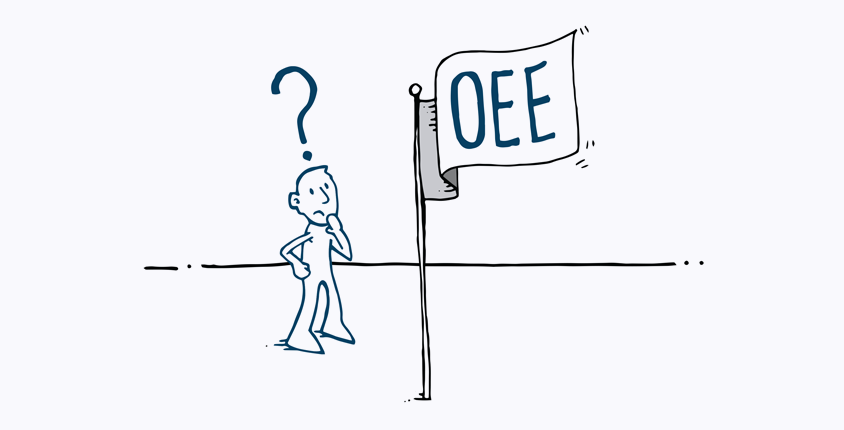 I was first introduced to OEE in 2008. After working with it for 11 years, I’ve decided to summarise my thoughts and experiences with it.

I’ve read several textbooks, consulted corporate manuals and gone back through a stack of notes from meetings with customers and consultants. As I scan all the material, I’ve concluded that OEE is very promising, frustrating, polarising and boring – at the same time!

In this post I’m going to unpack OEE at a high level. Then I’m going to boil it all down to some key questions to help you determine if OEE is something you should be using.

But before that, a brief history and explanation of OEE.

The use of OEE is first described in a 1982 book by Seiichi Nakajima called ‘TPM Tenkai’ which translates to ‘TPM Deploy’. TPM (total productive maintenance) is about keeping equipment in top working condition. OEE quantifies how close to that ideal a business is. Since 2004 there has been steady interest in the search term OEE on the internet, increasing slightly over time. Interestingly, while interest in the OEE topic has increased, that in TPM has steadily dropped.

I won’t go through how OEE is calculated with equations and time charts. These are all over the internet. I’ll keep things at a high level.

OEE is made up of three ratios. They have the terribly vague names Availability, Performance and Quality. If I could officially rename them, I would. I’d use something like in the table below.

Then, to get OEE, you just multiply the three ratios. Take this example

OEE quantifies how much capacity in the machine or process was wasted through not going, going slow or going wonky. It expresses that as a single number.

The ability to summarise of all these factors into a single number is why OEE is so promising. It feels like one of those god father metrics. In fact, let’s slap a target on it right now (85% is world class isn’t it), and drive it up. Job done. Off to a good start.

But, once we get into the details, things are not so simple. The main trouble comes from needing to discern between planned and unplanned events. During planned maintenance, should OEE go down or are planned events excused from OEE waste; after all, they were planned? Drop this question into any team, then sit back and watch the debate unfold and the confusion level rise. There are valid arguments on both sides, which I go into at the end of this article. But for now, see this as the reason to create strict rules and categories. Once you have rules and categories, you have to document and police them. Sounds a lot like working with a chart of accounts doesn’t it?

The other frustrating thing is the realisation that driving up OEE can bring significant negatives. Like adding labour or contractors into the process to reduce downtime or increase speed. OEE looks great, but expenses just ballooned!

Has the promise of OEE has just lost some of its lustre?

Because of its mix of promise and frustration, adherents and detractors for OEE (and how to implement it) can be found everywhere. Maybe team members have been poisoned by past experiences where OEE was haphazardly implemented. Or targets have been set as an edict from on high, and results are massaged to paint a rosy picture. Those who stand to gain from it are suddenly at odds with those who are pulled along.

OEE is a bit Boring

Well, you’re still reading, maybe OEE is not that boring. But let’s face it, few can get excited about the ins and outs of coding and categorising downtimes, just to come up with a single number. Working with autonomous vehicles or robots is far sexier and makes for better conversation at a BBQ.

With its combination of promise and fishhooks, the key question is, should you be using OEE? And if so, what are the big questions to answer before you dive into the detail.

Should you be using OEE?

Below is a list of 5 questions. The more yes’s you give, the stronger the case that you should be using it.

As you can see, if demand is high and if equipment is a limiting factor, then a yes to using OEE is a no-brainer.

Conversely, if meeting production targets is not a struggle, or if operating costs (not capital) are significant, proceed with caution. Also, effectiveness and efficiency measures can be a hindrance if your strategy is to be more flexible or innovative. In that case there are more direct ways to measure what’s important in your operation than OEE.

Next, you need to decide which school of thought you adhere to around measuring OEE. The key question is how you intend to deal with planned events. I’ve been involved in many conversations which go around in circles because this hasn’t been carefully considered and stated.

Any downtime, planned or unplanned, is viewed as waste and will be included in OEE. This will encourage a team to minimise any planned and unplanned downtime. This school of thought works well with smaller, multi-functional teams all working together to improve performance. Think of this option as the right one for Lean purists.

Planned downtime should not hurt OEE because it was expected. To implement this, you do need strong rules around coding. The danger of this approach is that your focus can move from reducing waste, to meeting the plan. That said, I understand that this method has it place, especially in more departmentalised heavy industries. In these sectors, an optimised production plan is the central point around which all other activity is organised.

How loud and proud should your OEE initiatives be?

Finally, how much attention should I draw to our OEE results and targets. The answer to this question is really up to the individual manager or workplace. I’m always wary of slapping targets on things or proclaiming measures too loud and proudly. My reasoning can be found here. Goodhart’s law comes into play here, which states that if you turn a measure into a target, it then fails to be a good measure.

Personally, I feel that the development of the processes and habits that drive great OEE results should be the focus. They are more direct, timeless and satisfying for staff.

By all means communicate OEE performance, but remember it’s just a means to an end, not an end in itself.

This magic tool helps you react correctly to data

This blog article will introduce a tool that will help anyone develop more consistent and appropriate reactions to data. An essentially skill for data-driven managers and evidence-based leaders.